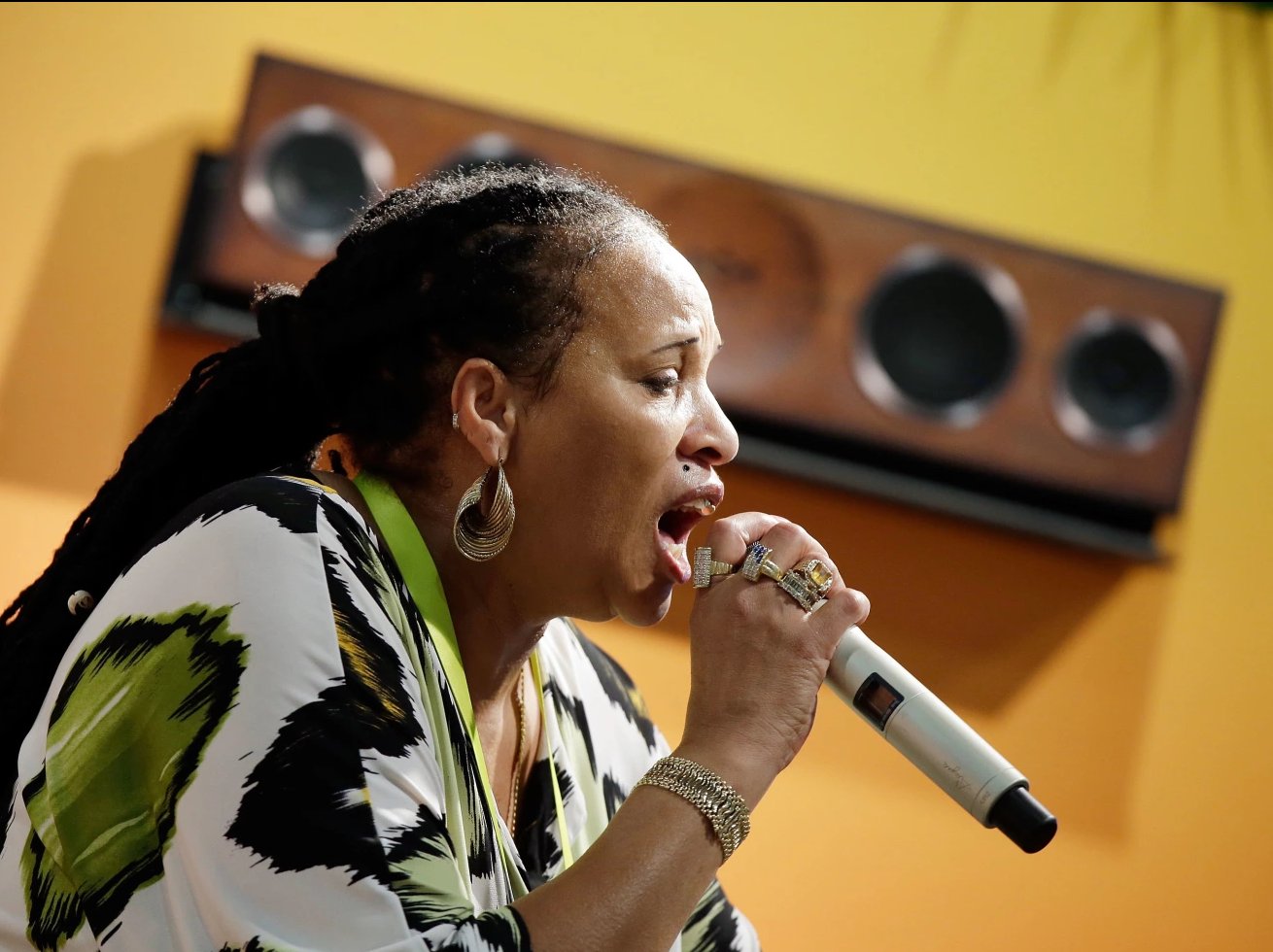 Sister Nancy, aka Muma Nancy, real name Ophlin Russell-Myers, (born Ophlin Russell, 2 January 1962, Kingston, Jamaica) is a dancehall DJ and singer. She is known to the world as the first female dancehall DJ and was described as being a “dominating female voice for over two decades” on the dancehall scene. One of her most famous songs is “Bam Bam”, labeled as a “well-known reggae anthem” by BBC and a “classic” by The Observer.

Russell-Myers was one of 15 siblings. Her elder brother, Robert, is better known as Brigadier Jerry, and by her mid-teens, she would occasionally perform on the Jahlove Music sound system that he worked with,[4] and worked for three years on the Stereophonic sound system with General Echo. In 1980, producer Winston Riley was the first to take her into the studio, resulting in her first single, “Papa Dean” for his Techniques label. Russell-Myers went on to perform at Reggae Sunsplash, making her the first female deejay ever to perform there, and she is also the first female Jamaican deejay to tour internationally. She had further success with singles such as “One Two”, “Money Can’t Buy Me Love”, “Transport Connection” and “Bam Bam”. Her debut album, One Two was released in 1982. She went on to work with producer Henry “Junjo” Lawes, recording “A No Any Man Can Test Sister Nancy”, “Bang Belly”, and a collaboration with Yellowman, “Jah Mek Us Fe A Purpose”. She continued to appear live, sometimes on Jahlove Music with her brother. The sound system toured internationally, with both Sister Nancy and Brigadier Jerry making their debut UK performances at the Brixton Town Hall, London in 1982.

Passionate is the term that best defines Legal Shot. Feeling the shock waves of the speakers bouncing off the walls at the Notting Hill Carnival in the late 90’s, they were hooked. They decided to build their own system in the tradition of authentic Jamaican sound and built an over 20KW sound system.

In their travels to Jamaica and New York they have filled up their boxes with rare vinyl and original Dubplates, They’re playing Roots & Culture and specialized themselves over the years in Rub A Dub and Digital. They live up their sets of productions straight out of the Legal Shot Sound Studio.

For over ten years, with true drive and hard work, Legal Shot Sound System has shared with a growing audience their love for this music. And at each of their gigs they spread their passion for the sound system with the massive! The crew is composed of Matty Dread, Electrophil, Polak, Paco, Ben, Shinehead & Echo Minott.